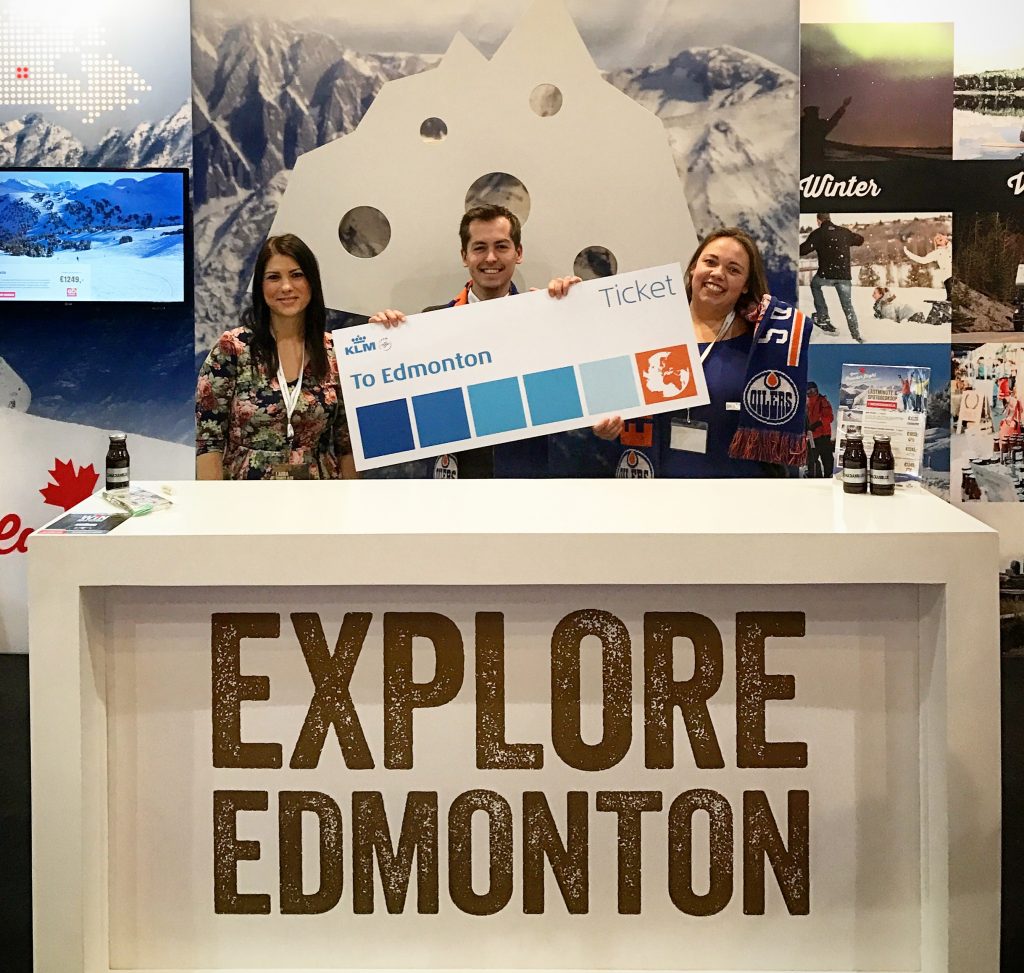 Full of excitement we started our trip on Tuesday 14th of February, which is indeed valentine’s day. This was not forgotten by KLM as well, since we got a sweet and tasty valentine’s day gift on our pleasant 9-hour flight from Amsterdam. It is a direct flight from Amsterdam to Edmonton, which is very convenient: Edmonton, the capital city of the province Alberta, is the closest international airport to Jasper National Park in the Rockies. When we arrived at Edmonton International airport, we were surprised by the size of the car we rented; it was so big! Our amazement went away quickly since we only saw big cars and immense trucks on our way to our hotel. Once arrived at the hotel, we had the feeling that we could go to sleep due to the time difference but luckily, we were invited to join an ice hockey game of the Edmonton Oilers. The game was a great way to get to know one of the Canadian traditions and the people that organized our trip. Dutch soccer is nothing compared to this, especially not since the Edmonton Oilers won. There is never a dull moment in an ice hockey game: the puck moves so fast over the ice and even during the commercial breaks the entertainers cheered the crowd. 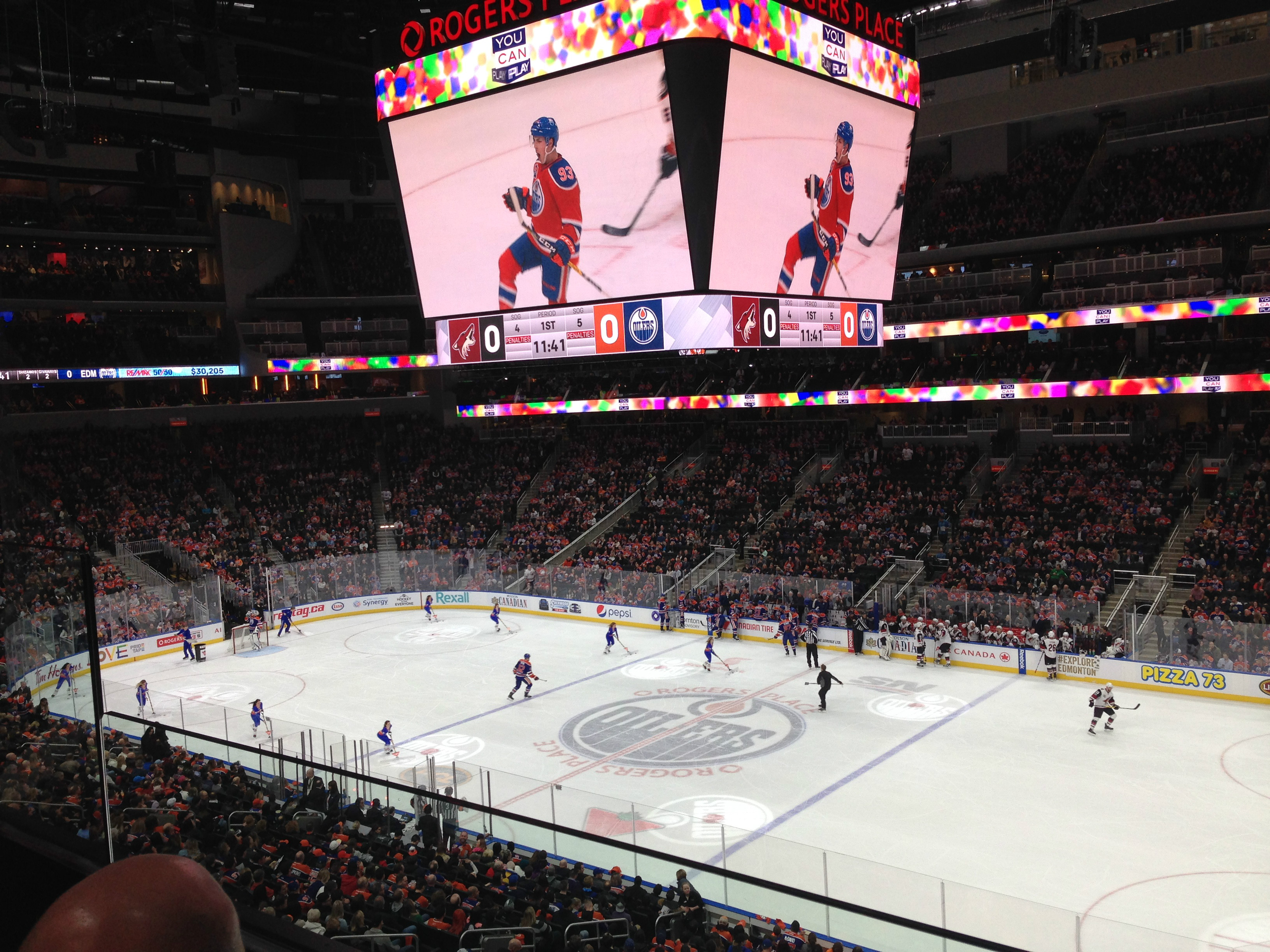 After one long night of sleep, we had to leave the charming hotel Union Bank Inn already. We headed off to Jasper around noon to get to our second destination. Although the drive was four hours long, we enjoyed ourselves with the beautiful views, especially in Jasper National Park. Once arrived in Jasper we found out that Jasper was a small but warm touristic village. The hotel was good as well; a big and cosy room with a great view of the incredible mountains.

Due to the rainy weather, we decided to explore Jasper National Park by car on the third day of our trip. Based on the many brochures we had read, we picked out the most popular spots and went to see; Medicine lake, Maligne lake, Pyramid lake, Athabasca falls and the Sunwapta falls. We were truly impressed by the nature of Canada, it was so beautiful even when the lakes were ice surfaces and waterfalls were only partly flowing. After a lazy but impressive day mainly spend in our car, we decided to spend our Friday in a more sportive way; we did a Maligne canyon ice walk and went dog sledding. Apparently, the morning tour was too early for other people, so we ended up having a private tour. With special boots and spiky cleats we were ready to enter the ice in the canyon. The guide was extremely kind and showed us the most interesting spots inside the canyon. It was great to see such a place from the inside and getting to know all the impressive details of the canyon and the nature of the Maligne area. The guide headed us carefully around the slippery parts.
Around noon we headed to Valemount for the dogsledding. The dogs were as enthusiastic as we were. Most exciting was the fact that we had to drive or own dog sled and instruct the dogs ourselves. So before we left, we had a short lesson in ‘’how to do dog sledding’’. The command hike was the start signal for the dogs and ho the stop signal. Easy, isn’t it?! Proper braking was very important, as well as keeping the sled on track by moving your weight from left to right. It was so cool! Everyone who gets the chance to go dog sledding, do it! It is definitely worth it and it should be an item on your bucket list.

The day after we continued our sportive mood; we went skiing the Marmot Basin. Although Saturday the 18th of February was officially called family day and we expected lots of people on the ski slope, it was relatively quiet. We could fully enjoy a sunny day of skiing at Marmot Basin and the beautiful view over the Rockies. Skiing with such a décor is awesome.

It was time to leave Jasper and the national park, so we headed back to Edmonton on Sunday. Although we were already familiar with the roads between Jasper and Edmonton, we were still enjoying the ride and impressed by the differences in nature and size between Canada and the Netherlands. Everything is big in Canada: the mountains, the roads, the cars, the trucks, just everything. 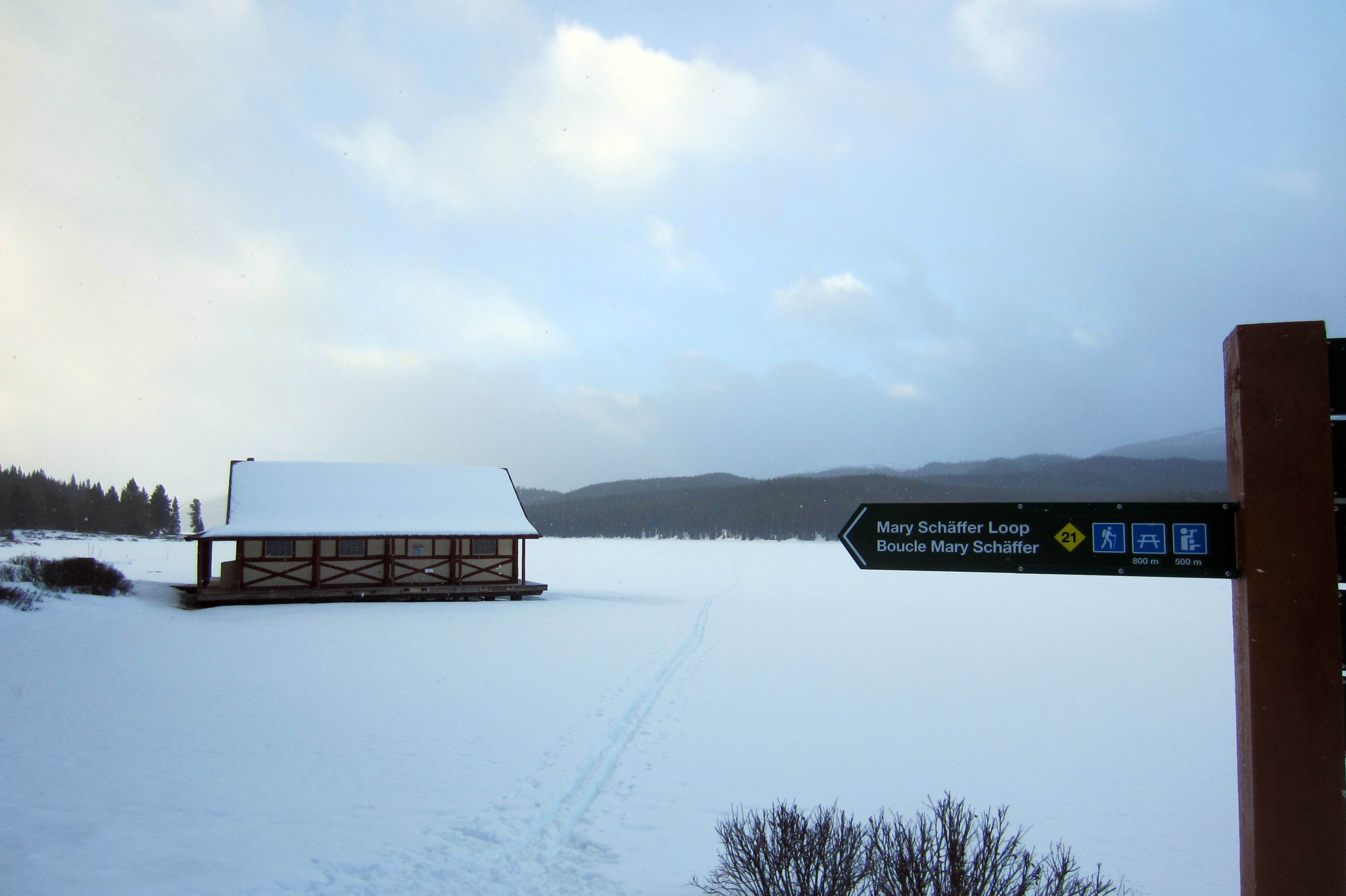 On Monday we went to Canada’s largest shopping mall, the West Edmonton Mall. Big again, as always! The thing that surprised us most, was not the overload of shops, but the in-house ice rink, the swimming pool, the golf park and a huge pirate ship with sails. This variety makes it possible to entertain all family member the entire day. In the evening we had dinner close the river valley. From this diner the view on Edmonton downtown (on the other side of the river valley is astonishing: Edmonton’s skyline is impressive. Edmonton is also known for its festivals: we visited the ice skate festival and the ice castle festival. While we loved the amazing weather and the ‘’hot’’ temperature during our trip, it led to unfortunately led to an unexpected closure of the festivals; the ice castles were melting already. As Edmonton is known as the festival city, we would like to get back another time to experience this!

Too bad Tuesday came too fast, 7 days in Alberta is really too short! On our last morning we walked downtown Edmonton, in between the skyscrapers. Really impressive, as well as the public government building with its pyramid-shaped glass roof. After that, we experienced the easy airport again: the car rental was next to the departures section. Handing over the keys, crossing the street and there was the check-inn, just in one go; Piece of cake! Not to speak of the cake on the KLM plane, which was extremely tasty. Thank you, Edmonton, Jasper, Alberta to show us your most beautiful places and introducing us to your awesome activities and great Canadian culture!